Welcome back to a new post on thoughts-on-cpp.com. In today’s post, I would like to talk about the floating-point model of the IEEE 754 standard. Before we start I would like to state that I’m neither a mathematician nor an expert on this topic. I’m just interested in this and I’m learning the best myself by explaining it to others. So feel free to leave comments about misunderstandings or other problems you see in the explanations of this post. As a reference I’m using the IEEE 754 standard and the book “Numerische Mathematik” which is, in my opinion, one of the best books about numerical calculation, but unfortunately only available in German.

The mantissa m is defined with a precision k, the number

To be able to store also negative exponents e with a positive number we need to add a bias, called B. Therefore we can say our exponent e can be stored as the positive number E with

. And B can be calculated by

. Typical values for single and double precision are:

Let’s try an example now. How would be the representation of

we get the mantissa

and an exponent with bias of

looks like the following as represented in the floating point model:

But wait, I remember values like 0.3 are a problem in binary representation. Is that true? Let’s try. 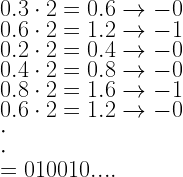 Ok, that seems to be really a problem, fractions like 0.3 can’t be represented exactly in a binary system because we would need an infinite number of bits and therefore rounding has to be applied while converting back from binary to a decimal representation. The machine epsilon is giving the upper bound of the rounding error and can be calculated by

with de as the smallest possible normal exponent. So let’s have a look at how all this looks like in a number series and think about what this will tell us.

. For double precision the smallest absolute value is

. Also very important to point out is the fact that the distance between the numbers is not equidistant in a binary system, they are increasing by a factor of 2 with each power of two. This is one reason why comparing floating-point numbers can be a hard job.

Herewith I would like to close this post. We’ve had an exciting little journey into number representation of binary systems and experienced their benefits, but also drawbacks. And for sure it’s not an easy topic, there is quite more to say about.

What are your thoughts?

This site uses Akismet to reduce spam. Learn how your comment data is processed.

View all posts by bmahr

Forecast for randomascii: programming, tech topics, with a chance of unicycling